WELCOME TO CUBICLE TO CEO CHIC

For as long as I can remember I just thought I was bad at things. I’m not talking about bad at one thing in particular I’m talking about being self conscious that I was bad at everything. Looking back to high school I assumed I wasn’t smart, I got great grades but I never thought I was smart enough. That continued on through college and into my post-grad life with just about everything. Assuming I wasn’t good at my job, that I couldn’t succeed in blogging, assuming I was going to be alone and that I wasn’t living up to my fullest potential. Yes I know that sounds dark, and thats how it felt for a while, it took some therapy and A LOT of self realization to realize… I was afraid to fail.

Failure is something that I think plagues everyone but it's not talked about very much. I wanted to share a few things that help me with getting over the fear of failure, so I can try to succeed in what I want.

Time Management - It sounds so simple but it can be so difficult for a ton of people, I am one of them. Even as I sit down to write this I am thinking of about twenty other things to do to put off doing this post. For a long time I thought it was because I had undiagnosed ADD or something along those lines, turns out to be just another excuse of mine. I would tell myself I would do something in 15 minutes or an hour then mentally put off doing it. While reading The Skinny Confidential blog I came across this little timer cube. No it isn’t a standard timer where you can input some times and hit the reset button or just randomly add some  more time to it. Instead you turn it on, pick if you would like to spend 5, 10, 15, 30 or 60 minuets doing something. Once the timer goes off, you just flip it back to the 0 side and then can start again. I started using this and it has helped tremendously! Instead of mentally telling myself “oh ill just watch TV for 15 more minutes” or “just one more” I now am using the timer cube to help track. It has been helpful to help with writing blog posts, finishing up work at home, cleaning & so many other things.

Small Goals - Looking at the big picture can be overwhelming, very overwhelming. It is important to have those large goals & to dream big. It’s equally as important to be able to have small goals within that big dream to use as stepping stones to keep you going when things get a little rough. I started out by writing out what my big dreams were. Once I had those written down, I started doing bullet points of what I have to do in order to get to those bigger goals. If you are a bit old school like I am and it helps to write it out on paper try a cute little goal planner like this Make Shit Happen planner. It makes it a bit more fun to be able to write everything down, especially with the larger goal sheets, then you can use the sheet next to it to write down what you think you need to do to get there. The calendar in here is also super helpful to see how long you want to space everything apart. Ive used this to plan out my blog posts, workouts, you name it and I’ve probably put it down in here. Its also important to acknowledge when you have accomplished your small goals. Keep a little diary by your bed to write down a high point of the day. You  don’t have to do this every day but when you are feeling a bit down or like you have “failed” you can go back and look at some of the great things you’ve accomplished recently. 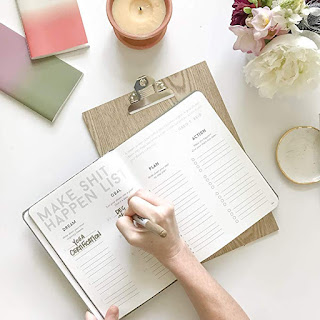 Put Yourself Out There - Earlier this year when I turned 27 I finally wanted to give myself and something inside me just flipped. I need to put myself out there to even give myself an opportunity to “succeed”. I finally admitted that I wasn’t even putting myself out there, instead I was wondering why I felt like I was overweight or why guys didn’t want to be with me or why I felt a particular way about myself. At the end of the day, its not about anyone else but ME (or in your case you :) ). I would sit and wonder why I wasn’t becoming a successful blogger, well, as it turns out if you don’t put yourself out there no one will even know about you. The same thing goes for dating, if I don’t put myself out there how are guys going to get to know me? They can’t, it’s just that simple. This even applies to work… I have been working my a** off, taking on more and more responsibilities with no raise or promotion.

I just said a lot in the last paragraph about some things going on, at the end of the day they were all initially rooted in fear, fear that Im not good enough, I’ll be rejected and so on. Let me break it down for you one at a time.

First lets start with blogging… I don’t blog to try and become famous or quit my day job. The reality is I do it as an outlet and to let people know they aren’t alone. I don’t want to talk to you guys about just the superficial things like clothes, makeup and trends. I want to tell you guys about how I worked my way out of depression, how I deal with my insecurities and so on. I want to put it out there so hopefully someone will read this and realize they aren’t alone. The idea of putting yourself out there to people who don’t know you yet is scary. I had so many thoughts going through my head I was convinced I was going to fail at this. I told myself everything from, no one will read what I have to say to people will make fun of what I have to say and so much more. It got to the point where for months I wasn’t even writing because I was so afraid of failing. At the end of the day, this should be a safe place people come to. Some days I’ll talk about fashion and boys, and others I’ll talk about some real issues going on in the world and depression. Honestly, you guys name it and I’m down to have a discussion about it. I know that failure of Cubicle to CEO Chic is just in my head, I'll be posting more now that I’m not afraid and I hope you guys come along with me.

Next lets chat about dating… oh the lovely topic of dating in NYC. So I have an interesting history of being in an abusive relationship that I hid from almost everyone in my life. It took me an extremely long time to finally say those words and understand that it wasn’t a real relationship since I hid it. Since then it took me about three years to recover. A few months before my birthday I was ready to get back out there, put myself on some dating apps and really give it a try to make a connection. I, however went about this all wrong (and for all I know I’m still going about it all wrong). I was going out with groups of girls instead of just a few of us (apparently a group of us is intimidating) and I was being very passive on these apps. When I turned 27, like I said, something just flipped inside of me and I was ACTUALLY ready to put myself out there. Psh, those next few weeks were a whirlwind of first dates. Truthfully, I needed to be more aggressive on the apps just to see what was out there. To be honest, there is a lot of trash out there. I’m still single, but so are so many of my beyond amazing friends. Because of that, I don’t really think its about us but its about the guys around NYC (peter pan syndrome, I’ll get into that at another time). The point is, if I didn’t put myself out there and start actually swiping on these apps, well I’d still be single. BUT that isn’t the point. The point is, I got my groove back, felt sexy and it feels damn good to turn some guys down now and again. If nothing else, some of my recent dating stories have made my friends and I laugh so hard we cry. Comment below and let me know if you want me to start sharing some of them. yes I wanted to show

Last but not least lets chat about my career, this is called Cubicle to CEO Chic after all! So I am working on a post about my workalike overall. A quick summary is that I work in marketing and I handle almost everything for Unilever Hair as well as some small (and amazing) ABI Beer brands. I was hired to only work on Unilever Hair but in the last year I had my work load doubled to also be working on five beer brands. Not only was this news to me the day that my wonderful colleague had to leave to deal with Visa issues but it was an entire new business I knew nothing about. It took me quite a while to understand the beer world, how things operated and all of the systems. Eventually I got it down to a science where I wasn’t working a million hours, but my workload was still doubled. I had quite a few conversations with my managing director about promotions and raises however I never directly asked for them. After talking to my mom, I decided to pull tougher two things at the same time. The first was my resume, because I am fantastic at my job so if they don’t want to pay me more then unfortunately I have to move on. The second was a document as to why I deserve a raise and promotion. I still haven’t presented this document to the appropriate people, but keep in mind, the only person looking out for your best interests, is you… Yes my company is super hip and cool (refer to pic below) but at the end of the day, I need to fight for wants right for me. I'll keep you guys updated on all of this. 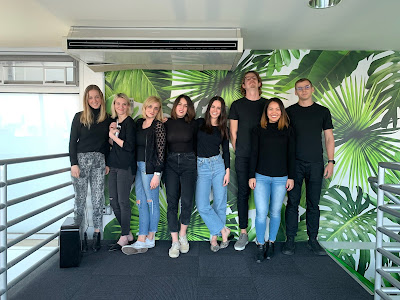 This was all a VERY long winded way of me saying, failure is scary and it drives most of us away from trying things we should be trying. What I want everyone to get out of this, is to get out there. I know its hard and the little voice in the back of your head may tell you that you can’t do something, but you can… Trust me. If I can get over my immense fear of failing, you an do anything.