WELCOME TO CUBICLE TO CEO CHIC

In any corporate environment there is bound to be turbulence. The turbulence can be caused from some shitty teammates, bad management, bad attitudes, you name it and there’s a reason for issues in the office.

Our office just had some big changeups that created more turbulence than I wanted to deal with but life as we know doesn’t always go as planned. Between new management coming in, new management letting go of some people in our office and then not telling us about it for a few days morale wasn’t exactly the best. To be honest, how could morale be positive when you feel like there is a sniper looking down at everyone and you aren’t sure who the next person to be picked off is. Once we were all FINALLY told that we “parted ways” with a few people and assured there weren’t going to be any more personal changes I decided it was time to take my team out to do something fun. Now, as a little disclaimer, I work in marketing with a bunch of designers who will be the first one to tell you they aren’t athletic. I wanted to have it be a fun activity that we can all get into, laugh with and be sure it wasn’t taking anyone too far out of their comfort zone. I came up with three options for the team to choose from.

Escape the Room - I haven't ever done one but everyone I know that has done one is obsessed with it. They all say it is very fun and gets everyone working together. That was vetoed because you can’t enjoy an adult beverage as you do this and we would have needed to split into two different rooms therefore defeating the point. Scavenger Hunt - I was willing to go ahead and pull together a scavenger hunt in NYC taking us to some cool funky spots ending at a bar. That was vetoed because some folks thought it was too much work to get to the end goal…Axe Throwing - yes the new hip & cool thing to do, axe throwing ended up being the winner here.

So along we go, we blocked off an afternoon so no projects were booked in the studio so around noon off we went to Brooklyn to go and do some axe throwing. I wanted to  look like I belonged so I wore lovely denim on denim look. 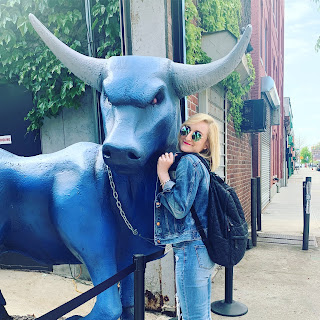 Beforehand we sat and got some BBQ then headed off to go throw some axes. I’m not going to lie, listening to our “axepert” talk to us about the do’s and dons of throwing axes was pretty intimidating. It definitely freaked me out a bit and all but convinced me i was going to end up with an axe in my thigh or cutting some of my toes off. Once he was done freaking us out, he showed us how to throw the axes and it was pretty simple. It turns out its as simple as a flick of a wrist as your hands are at your forehead, or as I wanted to refer to it as a classic Elle Woods saying Bend and Snap

Even though I was hoping this wouldn’t be too athletic of an activity, you can still tell who was naturally athletic and who wasn’t… Aside from that, it was a very fun productive day. We all got to have a few beers, lack at the lack of athletic action or how others were surprisingly good at throwing axes and more. Honestly, it was a great way to take everyones mind off of the recent turmoil that went on in our office and got everyone talking about things other than work. After our two hour session of throwing axes was over, we ended up deciding to stay for a bit to play Jenga (aka the best game ever) before heading to grab some ice cream.

Let me get to my real point here on team building… Taking the team out every now and again is hugely important to the morale and attitudes of what’s going on in the office. No you won’t be able to help everyones attitude, there are always some sour grapes in the bunch & not everything (or anything) can be fixed with a simple team outing. But for the most part it will at least remind everyone that they do matter. Yes we are in the craziness that is corporate America but there are little ways to let everyone know they are being thought of. I noticed after our little outing the team overall was in a better mood and it opened up the lines of communication to have discussions about what was bothering individuals.